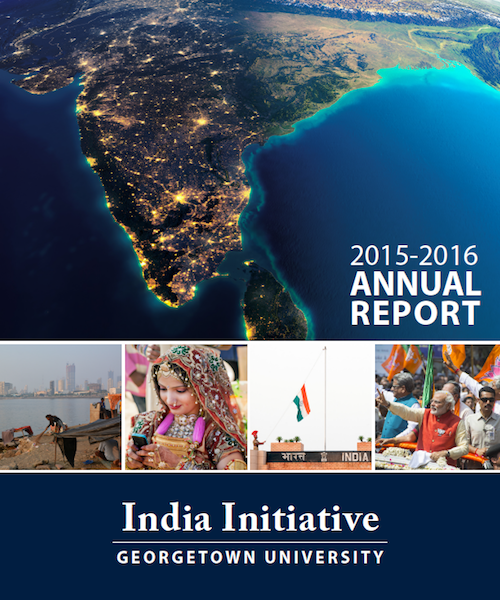 The India Initiative annual report provided an overview of the launch of the initiative, with highlights of key programming during the 2015-2016 academic year.

In Fall 2015, Georgetown University launched a university-wide India Initiative, which recognizes and builds on Georgetown’s considerable strengths to promote engagement with India across schools and departments. Our faculty are conducting cutting-edge research on Indian security issues, economic development, cultural practices, and historical ties, while keeping in mind their mission to serve the greater public good through policy advocacy and public engagement. The initiative convenes students and faculty from a wide array of academic and professional backgrounds, and our faculty committee is made up of professors from seven of Georgetown’s nine schools. Our students inspire us to do more and to do better, leading by example as they bring India to campus through programming and take Georgetown to India as they study and work in cities and villages across the country.

As you will see in the pages of this brochure, the 2015 – 2016 academic year was a productive one for the India Initiative. We had the honor of hosting Mr. Salman Khurshid, our first distinguished India policy fellow. Mr. Khurshid is one of India’s most eminent public servants, having served his country as foreign minister, law and justice minister, and as a leading advocate before its Supreme Court. During his time at Georgetown, he was a guest lecturer in the School of Foreign Service, read a play to our theater students, and spoke at the Georgetown Law Center. We also hosted the Honorable Ms. Poonam Mahajan, a sitting member of Parliament (MP) who followed in her father’s footsteps and participated in the Georgetown Leadership Seminar. The Georgetown India Initiative brought other leading figures in politics and public service to campus throughout the year to engage students in all four undergraduate schools, as well as the McCourt School of Public Policy and the Georgetown Law Center. We can and will build on such outreach to provide an unparalleled platform for high-level substantive conversations concerning India’s partnership with the United States, its domestic challenges, and its role as a global leader in the twenty-first century.

The Georgetown India Initiative also seeks to engage our alumni in India. In December 2015, Dean Joel Hellman of the School of Foreign Service visited Mumbai and New Delhi during the launch of the initiative. Dean Kelly Otter of the School of Continuing Studies visited those cities in January 2016, and in February 2016 Dean David Thomas of the McDonough School of Business gave a public lecture on leadership at an event hosted by the Federation of Indian Chambers of Commerce and Industry (FICCI). Such high-level outreach activities demonstrate Georgetown’s commitment to building a robust academic platform for U.S.-India engagement in Washington, D.C.

Fulfilling the promise of that commitment requires partners and resources. We hope that reading about our achievements inspires you to reach out to share your ideas and lend your support, so that we can work together to build a leading program in Washington, D.C. that advances the study of India and the development of U.S.-India Relations.